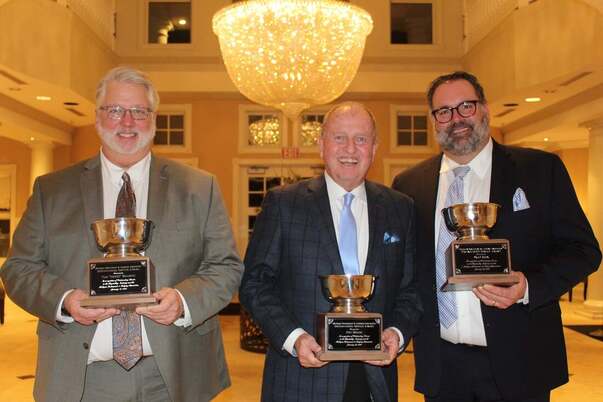 Brad Keen, Thomas “Dewey” Bramson and Ken Miller were selected by a committee made up of previous winners. It is the highest honor given by the MRLA and recognizes individuals who have provided exceptional and continuing leadership, vision and commitment to the Michigan hospitality industry.

“This year’s DSA award recipients all had a hand in redefining hospitality in the State of Michigan,” said MRLA President & CEO Justin Winslow. “All three gave incredible contributions to the industry and made career-long devotion to their individual craft, each with their own unique imprint. This association owes a debt of gratitude to all three of these industry pioneers.”

Keen is Chief Operating Officer for Maine and Michigan Resort Operations at Boyne Resorts, Harbor Springs, and served as Michigan Restaurant Association (MRA) Chairman in 2013 and 2017. He was born and raised in northern Michigan and has a deep understanding of the impact that tourism and hospitality have on the region. He was a pioneer is making northern Michigan a destination for all, not just those who call Michigan or the Midwest home.

“During his tenure, Brad transformed food from a simple necessity for hungry skiers to a dining experience delivered with exemplary service,” said Winslow. “For nearly forty years, he has been a staple of the Northern Michigan and Boyne communities and anyone who enjoyed spending time at Boyne or any of its 11 properties owes him a debt of gratitude.”

Bramson is President/Owner of Equity-Vest, Inc., a property and hospitality management company that is based in East Lansing. A Birmingham, Michigan native, Bramson began to leave his mark on East Lansing’s hospitality scene while working as a bouncer at America’s Cup and B’zar. He would continue to learn the tricks of the trade at Rick’s East Lansing, Harrison Roadhouse and Nuthouse Sports Grill.

In 1998, he helped establish East Lansing Responsible Hospitality Council, which brought together area restaurateurs, the East Lansing Police Department and members of the MSU community to promote and support on-site management and responsible alcohol service. Bramson joined Equity-Vest as Chief-Operating Officer and later assumed the role of President.

“To say that Dewey is a staple of East Lansing and Ann Arbor’s hospitality industry is an understatement,” said Winslow. “His commitment and dedication to the industry are unmatched, having positively impacted students and alumni, including both Spartans and Wolverines, through his years of service. He also held leadership roles on the MRLA Board of Directors and Michigan Restaurant and Lodging Fund, making meaningful contributions during his tenure.”

Miller is CEO and Principal Partner of Millennium Restaurant Group based in Kalamazoo. He also served as MRA Chairman in 2015 and 2016. A proud lifelong Michigan resident, he learned the value of hard work spending his youth on the family farm outside of Jackson. What started out as a beloved hobby, became a passion when Miller acquired Idler Riverboat in South Haven.

He would later establish Millennium Restaurant Group, operating multiple restaurant concepts throughout Southwest Michigan. His business background and devotion to the industry led him to become involved with and eventually serve two back-to-back terms as Chairman of the Board for the MRA in 2015 and 2016.

“As with every endeavor Ken has undertaken, he gave all that he had to the MRA and left big shoes to fill for future chairs,” said Winslow. “He is a tireless advocate for his community, having served as a Trustee for Western Michigan University, as well as on the board of Star Commonwealth and Southwest Michigan First.”
Michigan Restaurant & Lodging Association