The group, MI Time to Care which was almost exclusively funded by “dark money” from out-of-state donors, attempted to place a mandatory Paid Sick Leave proposal on the November 2018 general election ballot.

As originally written and if passed into law, the MI Time to Care proposal would have been the most extreme and burdensome Paid Sick Leave mandate in the entire country. Even worse than California!

The original proposal would have mandated that every employer across Michigan (no matter the size) provide mandatory Paid Sick Leave to every employee he or she employed at a rate of 1/hr. for every 30/hrs. worked.

Similar to Minimum Wage, in an effort to prevent this ballot proposal from reaching the November 2018 general election ballot, the Michigan Restaurant & Lodging Association worked on your behalf with the Michigan legislature to have them adopt the MI Time to Care proposal. If it were able to have gone to the November ballot, it would have passed with overwhelming support and would have required the MI Legislature to have ¾ support to ever make changes to the proposal again! Since the MI legislature took the necessary steps to prevent this job-killing mandate from reaching the ballot, the MI House & Senate only needed a simple majority in both chambers to make the necessary changes to the new Paid Sick Leave law. 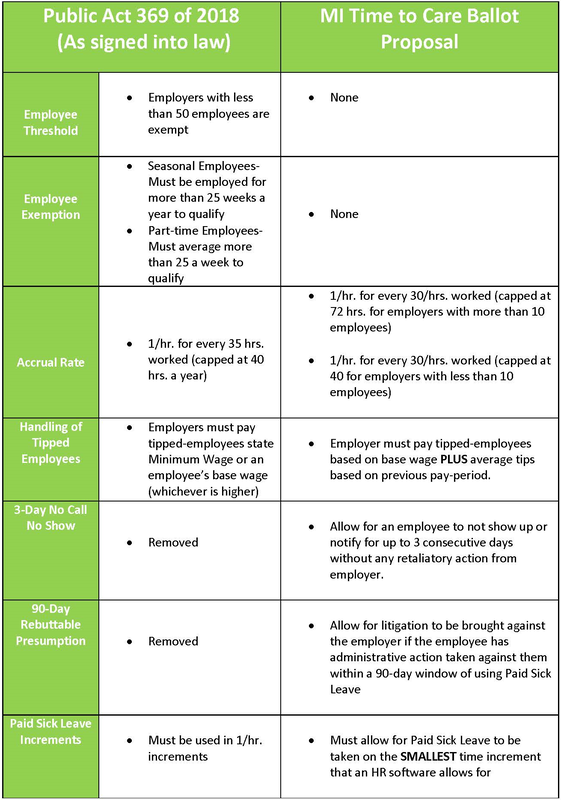