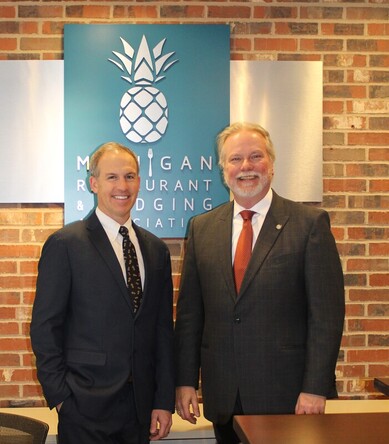 MRLA Board Member Trevor Tkach with Representative O'Malley
What is your background and why did you run for state representative?
I was born and raised in Detroit, and at about age 20 I set out for fame and fortune in the world of radio. I spent almost 40 years in radio and TV and I am proud to say I hosted the morning show on WTCM FM Traverse City for 34 years.

During that time I believe I got to know the people of the region and the state. I also used my show as a platform to inform and educate listeners.  Along, of course, with entertaining them. When the seat opened up I felt this was a good way to continue helping the people of my region. I hoped to bring my talents of listening and asking questions to the capital and so far in my first term I think I’ve been successful.
​
Representative, now that you have a year under your belt, what about being a state representative has been the biggest surprise to you?
I get this question a lot in one form or another. The biggest surprise has been the pace. When I’m in Lansing it’s meetings and sessions and then more meetings and phone calls. Then on Thursday afternoons I point the car north and don’t head home. I head back to my district. There I meet with constituents, tour flood damage, or meet with groups and attend activities. Then Monday afternoon it’s back to Lansing. I knew things would move quickly but the pace is surprising.

As a champion of Pure Michigan, why is the campaign so important to the state of Michigan?
How many pages do I get to answer this question? I come from an advertising background and frequency of message is important. You have to plant the seed and keep watering it. Coca- Cola doesn’t need to advertise, but they do because when you get thirsty they want you thinking Coca-Cola.

Michigan must be promoted both around the country and here at home. There are plenty of locations where you can golf, fish, and snowmobile. So as with Coca-Cola, when that decision is being made we want them thinking about Michigan.

There is an old adage for a business owner: late to bed, early to rise and advertise, advertise, advertise. Ad budgets should be the last thing cut… because once you stop telling people you’re there, they forget.  That might not be a sexy answer but it is the truth.

I also don’t subscribe to the idea “its all about Northern Michigan”. Detroit isn’t the “Comeback City” if nobody knows it came back.

"Michigan must be promoted both around the country and here at home.  There are plenty of locations where you can golf, fish, and snowmobile.  So as with Coca-Cola, when that decision is being made we want them thinking about Michigan"

​What has been the largest misconception you’ve realized since being in Lansing?
Lansing is not Washington. With the 24-hour news channels, everyone assumes that the state capital is like the nation’s. That dysfunction is not the same here. We have our differences and maybe things take longer than we’d like, but we do cross the aisle and have civil discourse.

What are some issues you would like to tackle in the coming years?
I’d love to see the roads funding issue be put to bed and we’ve been working hard on that.
​
I am personally working on forming a task force to figure out future high water and erosion issues.

One issue we are addressing is child care, specifically in-home care in rural Michigan. I want to figure this one out. It’s critical to our young parents.

Where is your favorite place to visit in Michigan and how has the hospitality industry made that experience better?
WOW…this is going to sound like I’m sandbagging, but I like all corners of the state. There is something I like about everywhere. I will admit I am a creature comfort animal. I joke with my wife that my idea of roughing it is when the ice machine is on a different floor!
Michigan Restaurant & Lodging Association